The terms "absolute" and "incremental" comes up frequently in the world of position control.  The exact meaning changes according to the context they are used in.  For example, absolute and incremental motion can refer to the type of motion done by the motor either by relating it to the absolute home position or the last known position.  Absolute and incremental feedback can also refer to the type of feedback device being used with the motor.  In this blog post, we will focus on the feedback system and hopefully clarify some differences for you.

First, let's go over an incremental feedback system.  An example  is shown below. 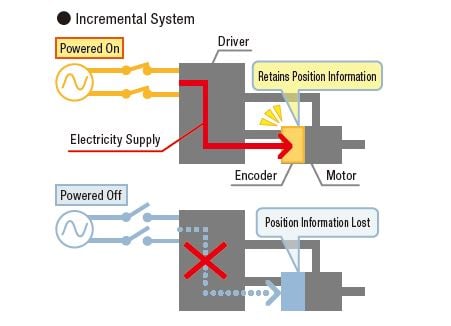 When powered on, the optical encoder receives power from the power supply and outputs a digital pulse signal as the motor shaft rotates.  However, when power turns off, the power is also cut off to the encoder, and the pulse signal ceases.  At this point, the current position, relative to a home reference position, is lost.  To reference the same home position again, a home routine operation is required, which could take valuable time away from normal operation.

An encoder is an electromechanical device that is mounted to the motor shaft and uses digital pulses to track the motor position.  By counting the number of pulses produced by the encoder, the distance from the last known position can be determined with a simple calculation, and this verifies if the motor is at the target position or not.

Inside an encoder, there is a light emitter, a disc with cut slits around the rim, and a light receiver.  As the encoder disc rotates with the motor shaft, the slits on the encoder disc turns the static light source on one side into flashes of light on the other side.  The light receiver on the other side detects these light pulses and digitally outputs a square wave pulse signal to the host controller.  A pulse is generated each step of the way if the resolution is the same between the encoder and the motor.

In an incremental system, an incremental encoder is the typical feedback device used.  An incremental encoder has 2 or 3 channel (A/B or A/B/Z) output.  Each channel equates to a physical track of cut slits on the outer rim of the encoder disc (200 slits per A/B channel for a typical encoder).  The slits for channels A and B are offset or out of phase by 90° in order to tell direction of movement.  The 3rd Z channel is just one slit on a single track and can either mark a home position or count the number of revolutions.  There is a picture to help explain this later on.

Since optical encoders rely on electricity to generate light pulses, an incremental system is not the most ideal if absolute position tracking is necessary.

In an absolute system, a battery is added to keep the power on to avoid losing position info in case power needs to be cycled for any reason.  When the system powers on, the power supply charges the battery, and energizes the motor, driver, and encoder so the position information is kept.  When the power supply is cut off, the driver and encoder will use the battery as the power source until it runs out.  At that point, you will end up with the same problem as the incremental system.

The difference between incremental and absolute encoders... 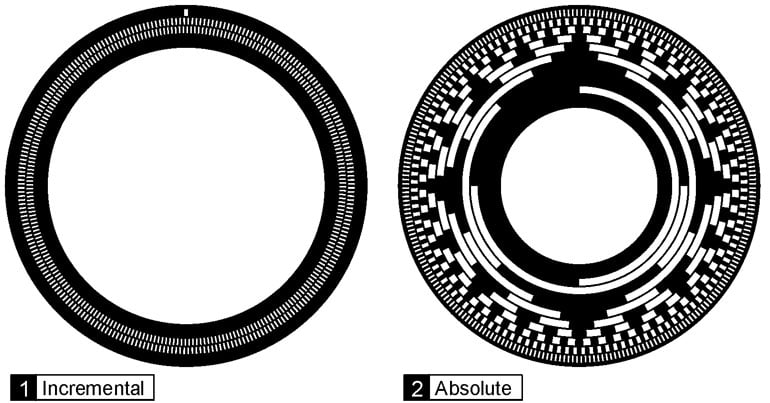 For example, imagine if you have an incremental system and an absolute system running at the same time.  Run both motors into a position without looking at the motor (pretend that you're a remote machine operator).  For the incremental system, you have to count the pulses produced by the incremental encoder from the home (0) position in order to determine how far your motor is from home.  For the absolute encoder, since the "addresses" are unique, you will immediately know where the motor is.  Instead of counting the number of pulses, you would read a binary number of 11111100, which is 252 in decimal.  With 8 bits of information, we have up to 256 (28) different unique addresses.  Many encoders used by servo motors offer 20 bits of information.

With an absolute system, the motor position is always known as long as there is power, so operation can resume at any position without performing a return-to-home operation.  However, a battery is necessary as well as inventory and maintenance.  No battery is needed for incremental systems, but position is lost as soon as power is removed.  A homing routine is a must for incremental systems.

The following table highlights the advantages vs disadvantages of incremental and absolute systems.

Is there an alternative?

Both incremental systems and absolute systems depend on power whether it comes from a standard power supply or battery.  When power is depleted, position tracking is lost.  There is another technology that is increasing its presence in the market, which is called magnetic encoders, or mechanical absolute encoders, or sometimes "ABZO" sensors.  In this type of encoder, light emitters and receivers are no longer used.  Instead, it uses segmented ring magnets and MR (magnetic resistive) sensors to determine absolute positions (see images below).  To track multiple revolutions of unique, absolute positions, a series of gears is used.

Due to differences in its design, this type of mechanical absolute feedback system is more robust than absolute encoders and can continuously track the absolute motor position even when the power is off.  While it may offer less resolution than absolute encoders, its simpler design and robustness (for heat, humidity, and vibration) may work for many position control applications.  Due to differences in their operating principles, encoder resolution does not benefit stepper motors as much as it does for servo motors. 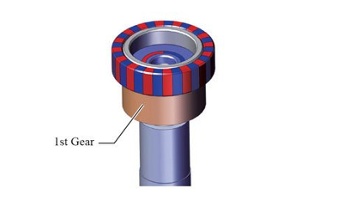 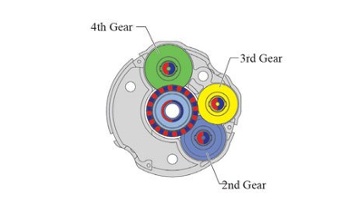 Incremental systems (with incremental encoders) are still the most popular system of choice for most applications due to the accuracy of open-loop stepper motors.  For absolute systems, the ABZO sensor, or magnetic encoder, presents a low cost, compact, and robust alternative to absolute encoders for engineers who want to eliminate the battery from their machine designs.

The important thing is to choose the one that's best suited for your application.