Historically, worm gears have been known as the most common type of gears used in a right angle gearhead.  Their low cost and robust construction have been sufficient for general purpose applications.  However, they are inefficient at slower speeds (higher reduction ratios), produce a lot of heat, take up a lot of space, and require maintenance.  As efficiency standards became increasingly important globally, another type of gear is being adopted for right angle gearheads.

In comparison, the hypoid gear set consists of a input hypoid gear and an output hypoid bevel gear.  Although the hypoid gear set is a hybrid of bevel and worm gear technologies, the gear efficiency is much higher even in high reduction ratios.  The key is that the hypoid tooth pattern minimizes sliding friction between the gear teeth to allow more torque transfer from motor shaft to load shaft.

In this post, we will summarize the performance differences between hypoid and worm gears from the white paper.

One of the biggest issues with worm gears is its low efficiency for torque transfer.  Typically, worm gear efficiency can vary from 40% to 85% for ratios of 60:1 to 10:1 respectively.  They also require a "break-in" period in order to run at peak efficiency.  Hypoid gear efficiency is up at 95% to 99% and do not require a break-in period.

Due to increasing importance in reducing power consumption (see IE3 or NEMA Premium Efficiency), efficiency is now one of the most important factors to consider when choosing a gear motor.  Since motors already have a long life, choosing an efficient gearhead to go with the motor makes a lot of sense in reducing maintenance costs. 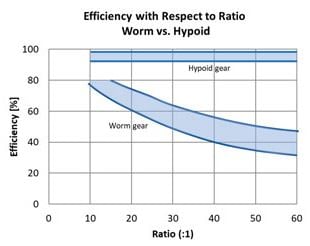 A higher efficiency gearhead will waste less energy.  Friction is wasted energy that takes the form of heat.  Since worm gears produce more sliding friction than hypoid gears, they run hotter, which reduces the service life of these drivers by putting extra thermal stress on the lubrication, bearings, seals and gears.

Since hypoid gears run cooler due to minimized sliding friction, there is little to do to keep them running at peak performance.  There is no need to replace lubricants because the grease is meant to last the lifetime of the gear motor.  This can help eliminate downtime and increase productivity.  In addition, cooling fins, breather holes and other peripherals used for cooling is eliminated, contributing to lower operating costs.

When we run a hypoid gearbox and a worm gearbox with the same motor side by side, we found that when the temperatures leveled off, there is a significant difference of 26.4°F. 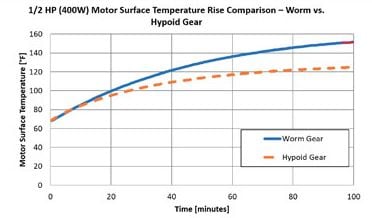 Due to the way the axes of the gears intersect, the hypoid gear set requires a smaller footprint than womr gear sets.  This helps in applications where space is a constraint.

Another benefit of hypoid gear motors is that they are symmetrical axially from the motor shaft to the load shaft.  Worm gear motors are asymmetrical and result in machines that are not as aesthetically pleasing, and mounting options are limited. 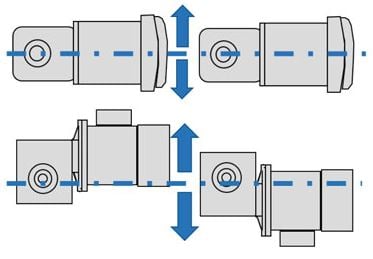 The higher efficiency and design from hypoid gears presents many advantages over worm gears from higher torque transfer, lower operating temperatures, smaller footprint, higher reliability, longer life, and less power consumption.  This ultimately leads to lowering operating costs in the long run, and the ability to design smaller machines.  Although upfront costs can be higher for hypoid gears, the advantagses  should offer something to think about when selecting motors for your next machine. 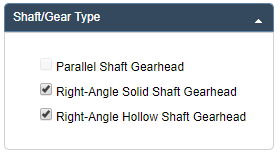