There are a variety of ways to synchronize the speed of multiple motors.  In this blog post, we will explain another advantage of using brushless motors systems, which is its ability to set speeds accurately and be able to synchronize speeds on multiple axes easily .  Brushless motors utilize built-in hall-effect sensors to regulate speed.  Even if the load, input voltage, or temperature fluctuates, the speed regulation will always be under +/-0.2% or better. 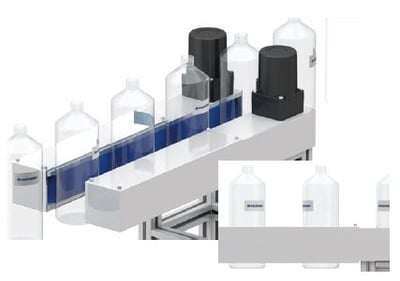 An ideal application example is shown below with a grip conveyor that has two belts on either side, driven by two 3-phase AC induction motors.  The speeds of the two motors are controlled by an inverter (VFD).   For a specific labeling operation where a specific side of the bottle has to be labelled, the speeds between the two motors must be synchronized.  Since AC motors do not use feedback speed control, the typical speed regulation of AC induction motors can be -3% to -15%.

Conventional Equipment: Grip conveyor with two belts on each side driven by two different 3-phase AC induction gear motors.  The speeds of the two motors are controlled by inverters (VFDs).

to easily synchronize speeds of the 2 belts driven by the motors.  For example, when the speeds are set to 3,000 RPM at the motor, the speed regulation is +/- 6 RPM at the motor (or +/-0.3 RPM with a 20:1 gearhead).  The speed can be set digitally in 1 RPM increments at the motor.  The dedicated driver can also display speed in revolutions or meters per minute.  The last step is to make sure that both drivers receive the start input signal at the same time. 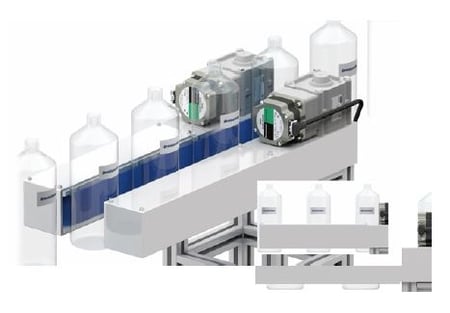 Watch how speed synchronization performance can be improved with brushless motors. or read more about