The structural strength of a motor comes from the combined mechanical rigidity of its case, flange brackets, and output shaft assembly.  For a gear motor, it also includes the gears and additional bearings.  However, the bearings located closest to the load "bear" most of this burden.  Needless to say, the radial and axial load specifications of a motor or gearhead has a lot to do with its bearings.

We show the internal structure of an AC motor and its gearhead below.  The same axial load and radial load concepts apply to all types of motors.

The images below shows an illustration of both radial load (overhung load) and axial load (thrust load) forces acting on a shaft of a motor and a gearhead. 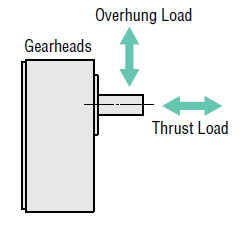 Radial Load is defined as the maximum force that can be applied to the shaft in the radial direction (any direction perpendicular to the motor shaft axis).  Radial load is also referred to as the "overhung load" because of how the load may "hang" off the shaft.  Radial loads vary by the distance between the installation point of the overhung load to its support bearing.

Axial Load is defined as the maximum force that can be applied to the shaft in the axial direction (in the same axis as or parallel to the motor shaft axis).  Axial load is also referred to as the "thrust load" since thrust force and thrust load are forces acting upon the exact same axis.  A typical axial load is about half the motor weight, although that has increased over the years.

These forces can act in any direction.

Both radial and axial load specifications are related to the strength, or mechanical rigidity, of the bearings, shaft, and case assembly.  Exceeding these specifications may result damaging the ball bearings, such as flaking from the raceway and rolling elements, or breaking the output shaft.

For example, if the permissible radial load is exceeded, then the shaft may start bending and ultimately break.  If the permissible axial load is exceeded, then the motor or gearhead bearing may deteriorate and ultimately fail.  Either way, the motor would cease operation or suffer decreased life.  The supporting element closest to the load is typically the first component to break.

How early the life may end will be proportional to how much these specifications are exceeded by and how long.  For example, since our ball bearings are rated for 10,000 hour life, exceeding either radial or axial load specifications by 10% may reduce its life by about 1,000 hours.

If you're interested in a service life estimation based on bearing life, please contact our knowledgeable technical support engineers.

A "seesaw / fulcrum" is typically used to explain this concept.

To ensure proper handling of all radial and axial loads, make sure these conditions are true:

For radial loads, there is an addtional component of "dynamic" radial load, which is the radial load when in motion.  Also make sure the calculated value is under the value in the chart (see above).

When pulleys, belts, gears, sprockets, chains, etc. are used as the transmission mechanism, the dynamic radial load is calculated with the following equation.

With a belt conveyor, the motor torque provides the driving force that generates work.  This is shown as T, which is the amount of torque in N·m.  If we consider y (effective radius in meters) to be the radius of the pulley, then we can calculate radial load or W (amount of work).

The actual equation is slightly more complicated as load coefficient and service factor are considered.

Other factors, such as drive method and load type, need to be considered for radial load.  When using a flat belt drive method, for example, the radial load value increases. 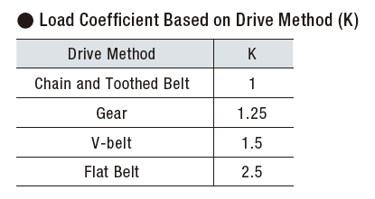 As for service factor, which relates to operating conditions, factors such as frequent starting and stopping of the load as well as changing of rotation direction can affect the radial load. 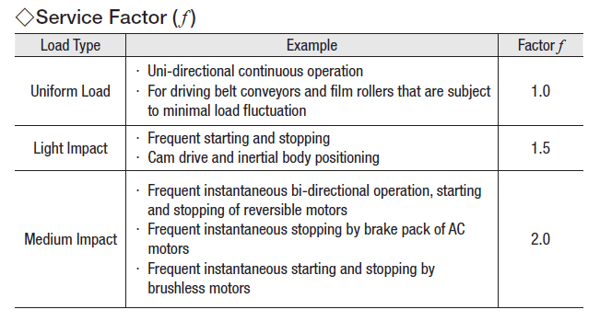 OK time for some practice.

Take a look at the belt conveyor application example below.  How would you calculate the value of required radial load that you'll need from the motor?

I'm working on a chain and toothed (sprocket) conveyor and using a 2IK6 motor with 360:1 gearhead.  I need 10 N·m of torque on an 0.1 meter (effective) diameter sprocket.  I'm guesstimating that the chain tension is about 10 N.  I only intend to rotate in one direction.  My sprocket is mounted 10 mm from the end of the shaft.

Can my gear motor handle the radial and axial load from my application?

The first questions I ask myself is: what equation do I use (we know this), and do I have all the variables?

Since we live in a perfect world, all the variables that are necessary for the calculation are laid out and provided in the preferred units.  In reality, it usually takes more work.  For example, notice that the load coefficient and the service factor were not given, but the drive method and type of load were given.  Also, the values provided may be in different units, so an extra step of unit conversion may be needed.

Once again, we need to:

Make sure these conditions are true:

Static radial load would be belt tension.  The 10 N was a guesstimate, but that's the best information we have right now, so we'll use it.  At 10 mm from the end of the shaft, our maximum radial load for the 2IK6 motor is 200 N, so we're good here.

Plug in values for every variable in the equation for dynamic radial load.

W = what we're solving for  in radial load in Newtons.

Static axial load is actually unknown at this point, but looking at the application image, we should not have a lot of static axial load, and it definitely should be below the 40 N value in the chart, so we're good here, too.

The 2IK6 motor with 360:1 gear ratio gearhead will be able to handle both radial and axial loads.

Most motor sizing software do not consider axial or radial loads, so don't forget to confirm your radial load and axial load after sizing your motor.

In most cases, a thorough motor sizing takes more work than you think.  If your time is as valuable as we think it is, let our experts help!

To begin your motor sizing consultation with us, please use our

, select one of the common applications (shown below), then fill in the blanks.  A sizing report, including calculations, can be generated.  Our knowledgeable technical support engineers are more than happy to analyze your motor sizing report with you to make sure you buy the right motor the first time (we do not like RMAs either).

As I have mentioned before, a successful motor sizing is only as good as the information provided.  Users often oversize motors because either they do not know the exact information necessary for sizing, or they want to extend the life of the motor.