In part 4, we will explain the main components of brushless motors: feedback, magnetic field, and permanent magnets.

A hall element is a magnetic detection element that utilizes the hall effect to detect the magnetic fields of the rotor magnets and output signals.

The state of a hall element that is affected by the magnetic field from a north pole is shown in Fig. 2.12.

If a current flows from the upper part to the lower part of the element and is affected by a magnetic field from the north pole in the direction indicated by the arrow, the distribution of the electric charges inside the element is unbalanced by the electromagnetic force.  As a result, an electromotive force that crosses both the current and the magnetic field at right angles is generated. 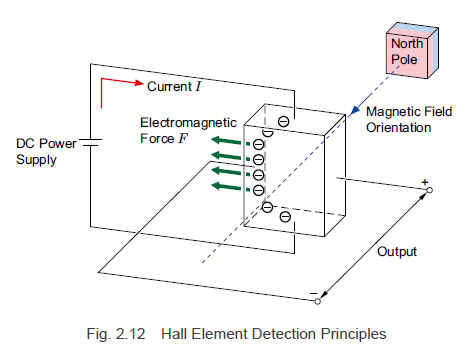 Since the signals are weak, they are easily influenced by noise where the signal lines are long and in environments where there is a lot of electronic noise.  A hall effect IC addresses the noise by integrating a circuit that shapes and amplifies the hall element output signals before outputting them.

An amplifier is used to amplify the weak output signal resulting from a hall element detecting a magnetic field, and it is shaped using a Schmitt trigger and output.  If the magnetic field strength of the rotor magnets exceed the hall effect IC threshold, a signal is output, and if it is lower than the threshold, the signal stops.  A hall effect IC is resistant to noise compared to the hall element output voltage, and it is simple to use.

Hall effect ICs detect the magnetic poles of the rotor magnets and perform output, but the encoder converts the light that passes through the encoder disk slit into an electric signal via a light-receiving component, then amplifies and shapes it before outputting the signal.

As shown in Fig 2.15, an encoder is equipped with small slits used for position and speed detection (phase A, phase B), as well as slits for detecting the magnetic pole position.  The light-receiving components for detecting the position and speed are arranged such that the signal phase difference as an electrical angle is 90°  in relation to the encoder disk slits.  Thus, it can accurately detect not only the motor rotation speed but also the rotation amount and rotation direction.

Oriental Motor has products equipped with encoders with magnetic pole detection signals.  Since the rotation speed and rotation amount can be accurately detected via the phase A and phase B signals, stable speed control at low speeds, and position control are possible.

The ferrite sintered magnet was invented by a Japanese person in 1930.  Since ferric oxide is the principal component, it is cost-effective.  In addition, because no surface treatment is required, it has good cost performance, and it is still the most commonly produced and used magnet worldwide.

There are samarium-cobalt (SmCo) varieties and neodymium (NdFeB) varieties, with neodymium magnets having the highest performance, making them essential for compact, energy-saving motors.  However, because few countries produce the rare-earth elements used to make them, few are produced, and they are expensive.

These magnets are molded and manufactured by mixing fine magnetic powder from ferrite and rare-earth magnets with resin and other binders.  Since they can freely assume many shapes, they have excellent workability in assembly and jointing work, but because they contain non-magnetic components, their magnetic properties are half or less than those of sintered magnets. 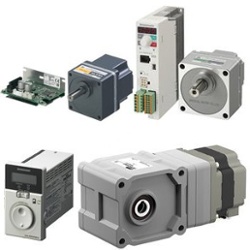