An easy way to alter the speed and torque characteristics of a stepper motor is to connect it to a different type of driver or change its wiring configuration.  However, there's more to it.  Knowing the pros and cons between "unipolar" and "bipolar" can make or break your stepper motor performance.

Let's look at these two different speed-torque curves.  These curves are actually generated from the same "base" motor but with different drivers.  Notice how speed and torque characteristics change.  HINT: pick a certain speed, then compare the torque at that speed.

REVIEW: How is torque generated?

First, let's start at the beginning and review how torque of a stepper motor is generated.  We know that torque is proportional to the product of the driving current and the number of winding turns (coil).  With greater number of turns, torque is higher but high speed torque is sacrificed, thereby limiting the maximum speed that the stepper motor can run effectively.  With lower number of turns, torque is decreased at lower speeds, but it is maintained out to faster speeds.

Let's take a look at the torque formula.

Here's how current affects the speed torque curve of a stepper motor. 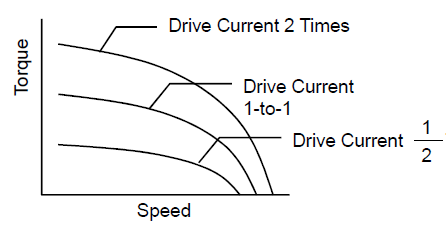 Here's how number of turns of winding affects the speed torque curve of a stepper motor. 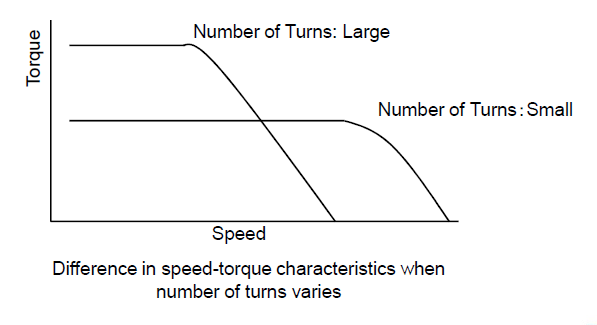 But...what if you can't change the winding current or number of turns?

N (number of turns of winding) and I (current) are typically specified and cannot be changed, so what else can you do to change the speed torque curve?  If you have at least 6 wires from your stepper motor, the answer is look into "unipolar" and "bipolar" wiring configurations.

What does "unipolar" and "bipolar" mean?

Now, let's take a look at the words, "unipolar" and "bipolar".  What do these words mean exactly?

The terms, "unipolar" and "bipolar", originated from the type of drivers used to drive stepper motors.  In simpler terms, the "uni" in unipolar means "one" and the "bi" in bipolar means "two".  The "polar" means electrical and magnetic polarity (FYI: the direction of the current flow determines polarity).

The main difference between "unipolar" drivers and "bipolar" drivers is its ability to send current.  The driver's ability to send current in one direction or both directions is directly correlated to the number of transistors used by the driver.  A bipolar driver would require double the number of transistors than a unipolar driver in order to control the current flow in both directions.

By changing from unipolar to bipolar, or vice versa, we are actually changing the electrical characteristics of the winding inside the motor, such as voltage, resistance, and inductance, as well as the torque characteristics.  Motor manufacturers often show different sets of specifications for the same motor by connection type.  Various winding options are offered for stepper motors of the same frame size and stack length for flexibility.

Don't worry.  At the end of this post, we share a stepper motor wiring cheatsheet to make this easier.

What are all the possible wiring methods?

The schematic diagrams below show both the motor winding and driver transistor circuit. 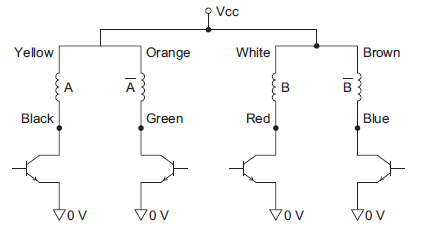 For unipolar and bipolar half-coil, we are essentially splitting the full coil and using half of winding at a time.  By doing so, we are using less winding turns, therefore the motor will not output great torque.  Since inductance is kept low, torque can be maintained out to higher speeds.

For bipolar-series, we use the full coil (winding).  By using the entire winding, the motor will output more torque compared to unipolar.  However, the inductance also increases by four, so the torque drops off rapidly at higher speeds. 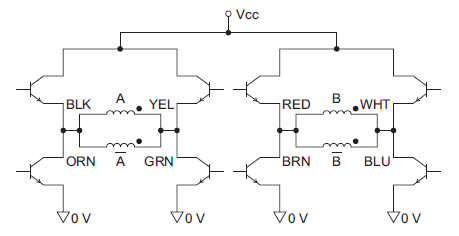 For the best possible speed and torque characteristics, bipolar-parallel is recommended.  This wiring configuration also uses the full coil, so the torque is increased by about 40% compared to unipolar.   The inductance is also kept low, which  allows the torque to be maintained out to higher speeds.  However, we must increase current by about 40% to get those advantages.

The changes in characteristics are summarized below.

With bipolar-parallel, we have low inductance with high current and low voltage, which is a good combination for the best overall torque performance.

The diagrams below show the internal winding wiring diagrams for stepper motors with different numbers of lead wires.  By tracing the current flow, you can visualize how much of the winding is being used.  If there's interest in that, please comment.

Here we show how to manipulate the wiring configuration from standard connections. 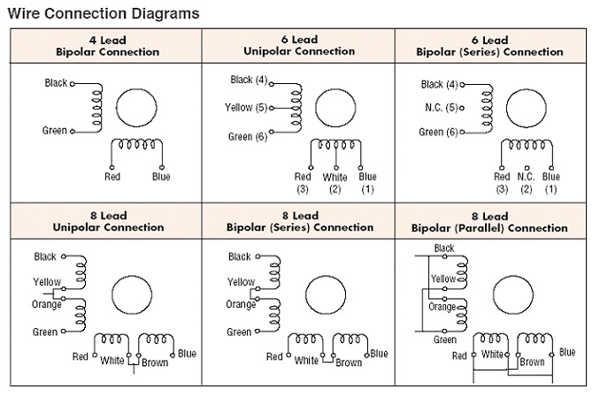 For example, to connect an eight lead stepper motor to a bipolar driver with bipolar-parallel wiring configuration, you must pair these lead wires together, then connect to the respective terminals:

Which wiring method is the best?

This is a trick question.  The answer is it really depends on your application.  The type of wiring configuration is usually included during the motor sizing portion of the machine design phase.  These wiring tricks also allow more repurposing of the same motor for different applications.

For example, if you are using a unipolar stepper motor setup and would like to increase its low speed torque for a different application, it's worth investigating the bipolar-series wiring configuration in order to keep the same motor size.  For the best combination of speed and torque, try bipolar-parallel.  However, it requires more current from the driver.  Remember that it also depends on what type of driver you have, and how much current it can output.

Here are the differences in motor performance shown with each individual speed-torque curve overlapped.  It's easy to see how bipolar-parallel (or parallel bipolar) performs the best. 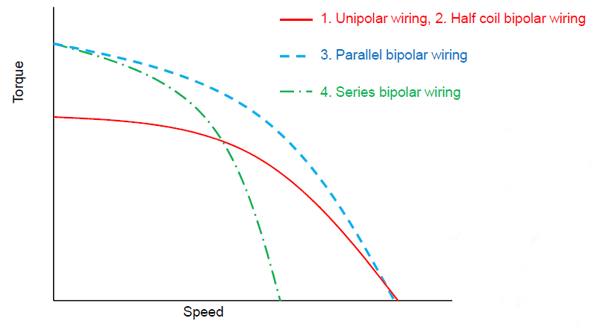 By wiring the same stepper motor differently, you can change its winding's electrical characteristics, and in turn change the performance characteristics of the same motor to suit an application better.  However, you need to know what you're doing.

are wound internally so there are only four lead wires to connect.  Multiple winding options are offered for each frame size and stack length to maximize flexibility in integration to various driver's electrical designs.

When working with stepper motors, it's best to make sure the entire team is on the same page with the wiring configuration.  You can size and buy the right motor, but wiring it incorrectly would create some confusion at the very least.

Here's a cheat sheet to help when you are working with unipolar and bipolar stepper motors.  Feel free to bookmark if it helps. 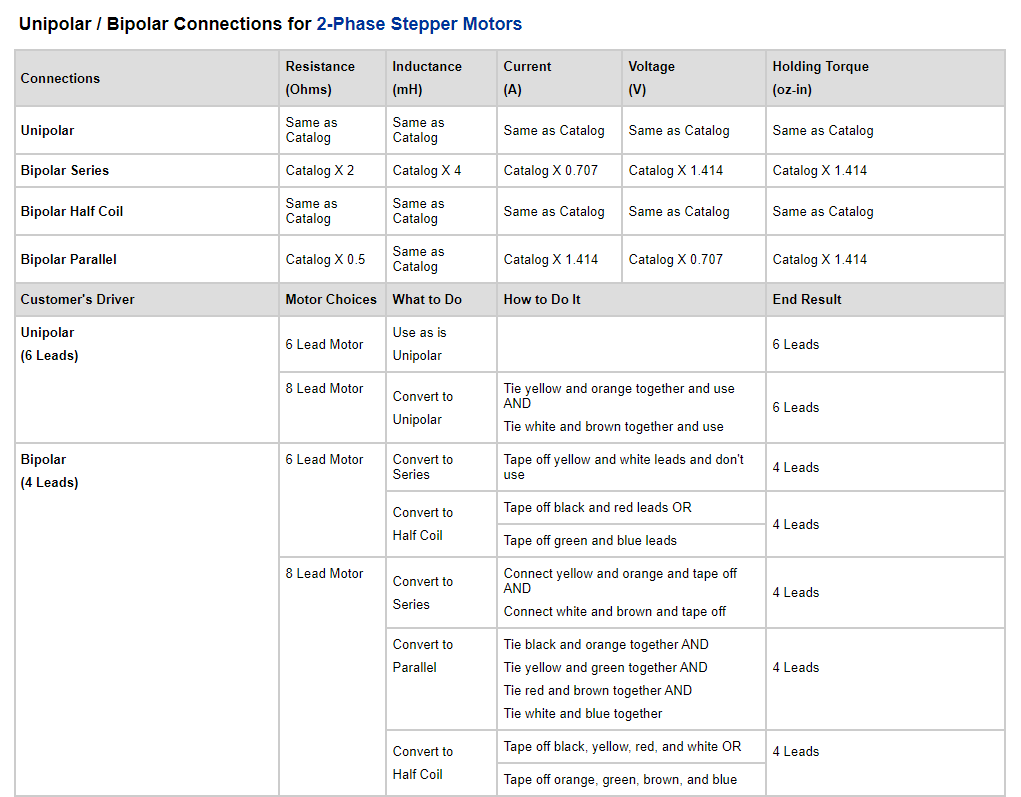